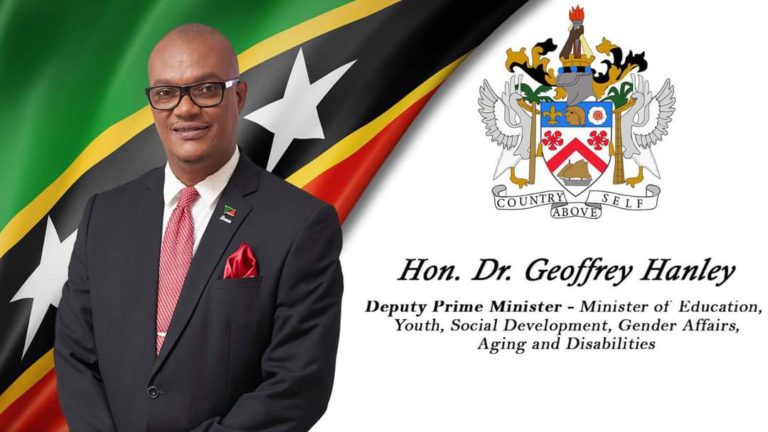 Dr. Geoffrey Ian Hanley is a Family Man, Supportive Husband, a doting Father, and a deeply rooted community man and an activist for people, especially youth and the elderly. Married to Adaeze Hanley for 20 years, he is the proud father of 3 beautiful children. Geoffrey received his foundational education at the Newtown Primary, the Maurice Hillier Memorial Junior School, and the Basseterre Junior and the Basseterre High Schools. Throughout his schooling, he demonstrated a love for people and service. From an early age, he was actively involved in working for others. He was very involved in the Boys’ Scouts, as well as his faith community where he was as an acolyte, a choir member, and a Sunday School Teacher. After graduating high school, Geoffrey found employment as a teacher and pursued professional training through the Division of Teacher Education at the College of Further Education (now Clarence Fitzroy Bryant College). He gave 28 years of exemplary service in the Public Sector as a teacher, an officer in the Ministry of Community Affairs, Youth and Culture, Youth Director, the Director of the People’s Employment Programme (P.E.P) and as a Primary School Principal before he retired in 2016.

In 2001, Mr. Hanley began journey towards completing a bachelor’s degree in Psychology at the Florida Memorial College, and this he did successfully. Subsequently, he obtained a Master of Science in Education from the University of Bridgeport. Upon his return to the Federation, he was assigned to the Department of Youth Empowerment and soon after, he was appointed as Director. In 2012, he became the manager of the People’s Employment Program (P.E.P.). As one who keeps very active, Mr. Hanley continued climbing the ladder of academia and in 2016, he received his doctoral degree in Leadership and Executive Management. In the same year, he assumed the post of Principal at the Bronte Welsh Primary School where he was instrumental in elevating the profile of the school into a model learning institution in the Federation.

Dr. Hanley credits his success to his mother, to whom he espoused that he owes a deep debt of gratitude for her unwavering investment in him, despite all her challenges and shortcomings. He has no doubt that he was her pride and joy in life, and he honours and cherishes her memory in all he does each day. Geoffrey is a youth at heart and demonstrates a passion for youth issues. Dr. Hanley is a name that is almost synonymous with volunteerism, community organizing, and a youth advocacy. He was very instrumental in introducing a number of programmes that empowered the youth of the Federation of St. Kitts and Nevis. He is the founder of the St. Kitts National Youth Parliamentary Association (SKNYPA), formed in 2001. He was also a founding member of the Basseterre Leo Club. He has been a Scout all his life, and now serves as the Deputy Scout Commissioner. Mr. Hanley also has a special place in his heart for the elderly.

He loves caring for the elderly and finds pleasure in talking with them, cleaning their homes, taking them to their doctors’ appointments, checking their blood/sugar levels, administering their insulin, and taking their vital signs. Dr. Hanley is often heavily immersed in community activities. As a Community Man, he is involved with a number of groups and community initiatives. He was instrumental in reviving the New Town Community Festival and is a volunteer for just about anything asked of him. He provided free services to the Police Training Academy as a Lecturer in General Psychology. Among other things, Geoffrey is also a member of the St. Kitts Basseterre Lions Club, where he has served as President. He has been exposed to politics ALL of his life and never once has he given to a cause expecting anything in return.

He would remind that he was brought up to be a man of integrity and respect! Geoffrey is very affable, and he a very hard-working individual who strives to be a person of integrity. As a Christian. he loves the Lord and serves as Men’s Leader in his church, Resurrection and Life. He also ministers the Word of God. Serving others comes naturally for him! His faith has contributed significantly to him being the humble, respectful, and highly respected man that he is.

Dr. Hanley is one of our nation’s most passionate patriots; a man who has always believed in building up and not tearing down; in building bridges of love and not walls of hate! Dr. Hanley was elected as the representative for the St. Kitts and Nevis Labour Party for Constituency Number 1 (East Basseterre) in 2018. His strong will, tenacity, passion, and hard work secured his victory at the polls in 2020 and 2022. He now holds the highly respected post of Deputy Prime Minister of the Federation of St. Kitts and Nevis, in addition to the many ministries to which he provides leadership. He is the Minister of Education, Youth Empowerment, Social Development, Gender Affairs, Aging and Disabilities, Ecclesiastical & Faith-Based Affairs, and Housing & Human Settlement