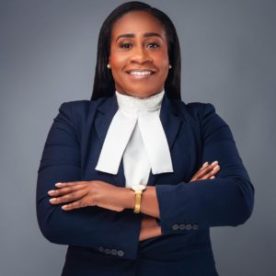 Ms. Lanein Blanchette, Hon Speaker of the St. Kitts-Nevis National Assmebley  is a value-driven Attorney-At-Law who was raised in the community of Saddlers Village but has been residing in her Father’s hometown, Green Valley, Cayon, for the past 14 years.

In 2008, Lanein earned her Bachelor’s Degree with Honours in Criminal Justice from Monroe College, New York. Shortly after her return she landed a secretarial position in 2009 with the Government of Saint Christopher and Nevis in the Ministry of National Security. Her introduction to the public service fueled a passion for helping others while her role in the Ministry exposed her to matters that further provoked her curiosity and desire to explore her love for Criminal Law and the Justice System.

She took a leap of faith in 2012 and enrolled in the Bachelor of Laws programme at the University of the West Indies, Cave Hill Campus (Barbados). During her tenure, Lanein served as Vice President of the St. Kitts Nevis Student Association and was also elected Law Society Sports Chairperson 2014-2015 where she was able to continue to pursue her passion for sports alongside her studies. Lanein graduated with honours in 2015 and moved on to pursue an intense legal training at the Norman Manley Law School in Jamaica where she obtained her Legal Education Certificate in 2017.

Lanein Blanchette is now the founder and Lead Counsel at Blanchette Law Chambers.

Complimenting her passion for Law is her love for sports; a passion she inherited from her parents. She continues to actively volunteer in community sporting activities in areas of netball and football, Ms. Blanchette serves as the President of the Aces Netball Club, and is a member of the St. Kitts Nevis Sport Council. As an ardent supporter of the Cayon Football Club, she often shares with them, her time and talents. She previously served as the St. Kitts Netball Association’s Constitutional Chairperson/Volunteer Counsel.

Her personal mantra is to “finish the race strong, no matter how long or hard; slow and steady at all times”