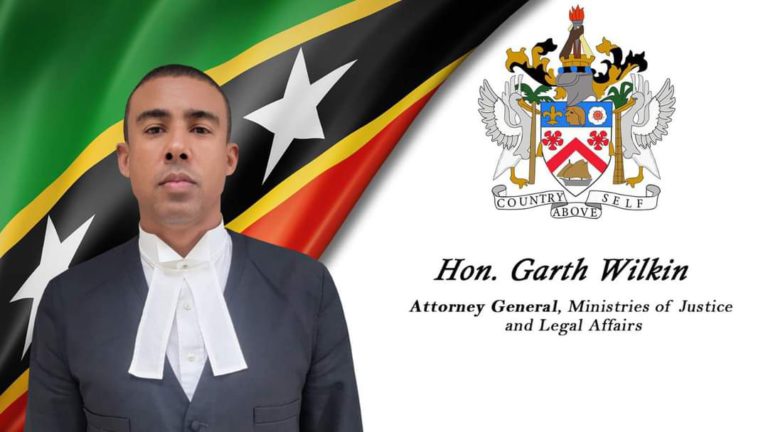 Meet Senator Garth Lucien Wilkin was sworn in as the Attorney-General and Minister of Justice and Legal Affairs of the new Cabinet of the Government of St Kitts and Nevis on August 13, 2022.

The Attorney-General was born in St Kitts, but also resided in Antigua & Barbuda, Barbados, Jamaica and the United States of America during his formative years. He is admitted to practice law in St Kitts & Nevis, Anguilla, Montserrat, and Antigua & Barbuda. His areas of expertise during his practice with the oldest law firm in St Kitts and Nevis, Kelsick, Wilkin & Ferdinand, included General Commercial Litigation, Banking, Insurance, Construction Litigation & Arbitration, Injunctive Relief Litigation, Employment Law and Environmental Law. He was a partner of Kelsick, Wilkin & Ferdinand from 2017 up to his appointment in 2022.

During his first three years of practice, Mr. Wilkin acted as Crown Counsel Prosecutor in the High Courts of St Kitts, Nevis, and Anguilla. Prior to his appointment as Attorney–General, he served as the President of the St Kitts & Nevis Bar Association; on the Management Council of the Brimstone Hill Fortress National Park Society; and on the Board of Directors for Federation Media Group Limited, an independent media company operating as WINN Media SKN/WINN FM. He still serves as the Cricket West Indies representative on the Cricket Tournament Committee of the Caribbean Premier League.

During his time reading Law, the Attorney-General was awarded four prizes for placing first in his class: the Joseph Archibald QC Prize (Alternative Dispute Resolution), the Michael March Memorial Prize (Remedies), the Hon. Mr Justice Kenneth Smith, OJ Prize (Trial Advocacy) and the coveted Chairman’s Prize (Evidence, Forensic Medicine, Civil Procedure II, Remedies). Being an ardent mooter, he represented the University of the West Indies at the Philip C. Jessup International Law Moot Court Competition in Washington DC (2008) and the Norman Manley Law School at the Margaret Forte Memorial Inter-Schools Mooting Competition in Trinidad and The Bahamas (2010). His article entitled: “The Doctrine of Legitimate Expectations: Its Development as a Fetter on Administrative Action in the Commonwealth Caribbean” was published in the UWI Student Law Review (March/April 2008).

The Attorney-General is also an avid sportsman having represented St Kitts at cricket, Virginia Tech at table tennis and Harrison College (Barbados) at cricket, track and field, tennis, and table tennis. He still plays tennis and football regularly.