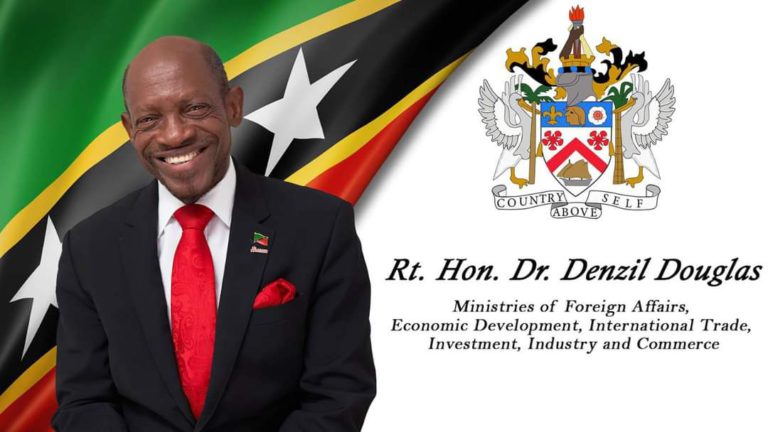 The Rt. Hon. Dr. Denzil Llewellyn Douglas was sworn in as the Second Prime Minister of the Federation of St. Kitts and Nevis immediately following the St. Kitts- Nevis Labour Party’s impressive election victory in July 1995.

Dr. Douglas was born January 14th, 1953, in the Village of St. Paul’s. Upon the completion of his secondary education, he taught for one year then proceeded to the University of the West Indies (UWI), Cave Hill Campus, where he obtained his BSC (Hons) in Natural Sciences in 1977. Dr Douglas returned home and again taught for 2 years, then continued further studies at Mona Campus to obtain a Bachelor of Medicine, and Bachelor of Surgery degrees in 1984. Following a two-year internship in Trinidad and Tobago, Dr. Douglas returned to St. Kitts and Nevis and established a private medical practice and served as the President of the St Kitts-Nevis Medical Association for several years.

Denzil Douglas’ political career began at an early age in 1979 when he became the first Young Labour Representative to sit on the National Executive of the St. Kitts-Nevis Labour Party. In 1987 he was elected Deputy Chairman of the Party. In March 1989, he was elected as the Parliamentary Representative for St. Christopher 6 (Newton Ground/Harris’) and was appointed Leader of the Opposition in the National Assembly. In May of that year, he was elected National Political Leader of the St. Kitts-Nevis Labour Party.

Over the next five years, Dr. Douglas restructured and modernized the Labour Party, paving the way for the landslide victory in the 1995 Elections, when the St Kitts-Nevis Labour Party won 7 of the 8 seats on St. Kitts. Dr. Douglas was sworn in as Prime Minister on July 4th and set about creating a diversified economy based on agriculture, tourism, international financial services, information and communication services, and light manufacturing enclave, with a massive land empowerment program and expansion in the housing, education, and health sectors.

In the Election of 2000 Dr. Douglas was re-appointed Prime Minister, winning all eight of the seats on St. Kitts in the 11-seat National Assembly of the Federal Parliament. Calling an early Election in 2004, Dr. Denzil Douglas again led the Labour Party to secure a mandate at the Polls, winning seven of the eight seats on St. Kitts, with Dr. Douglas commencing his third term as Prime Minister.

With a fourth consecutive victory at the Polls, winning six of the eight seats on St. Kitts, Denzil Douglas in January 2010, forged a working relationship with Nevis with the Attorney General and Minister of Foreign Affairs serving as a Member of the Federal Cabinet. Dr. Douglas then became the longest-serving Prime Minister in the English-speaking Caribbean and the 54-member Commonwealth of Nations.

Having skillfully advanced the social, economic, and political interests of St. Kitts and Nevis over the twenty years that he served as Prime Minister, Dr. Douglas today remains a popular highly regarded leader. He played an active role in key regional and international organizations and received awards for outstanding leadership, peacekeeping, and his role in the fight against HIV/AIDS.

Prime Minister Douglas was also the spokesman on HIV/AIDS, Non-Communicable Diseases (NCDs), and other health-related matters in CARICOM quasi-Cabinet, thus earning him much praise and recognition for his leadership role in the fight against HIV/AIDS from former U.S. Presidents Bill Clinton of the Clinton Global Initiative and George Bush.

As Prime Minister, Dr. Douglas played an active leadership role in many regional and international organizations: